After our light meal or I should perhaps say “Starters” at Shanghai Street Dumplings, we took a short walk to Chin Chin which is located along Flinders Lane. Our initial plan was to have dinner at Chin Chin on Sunday evening. However, when we arrived at 7.30pm on a Sunday evening at Chin Chin, there was a long queue and we were told that we could only be seated by 8.45 pm which was a bit late. So, we decided to arrive early around 6pm for an early dinner at Chin Chin for an early night before leaving to Sydney the next morning. Luckily, second time around and there was a small queue although the tables were mostly occupied at Chin Chin. Chin Chin must be very popular among the locals as it was already hustling and bustling before 7pm!

Chin Chin brings South-East Asian cuisine to the table with Benjamin Cooper as its executive chef behind the food. Chin Chin only accepts a walk-in only policy except of one table of 10-12. It’s first come, first served. Step inside Chin Chin and the ambience and interior consists of Asian pop artwork – it’s modern, sophisticated with a hint of Asian elements.

We started off with the Chilli Salt Chicken Wings with coriander and fresh lemon ($14). The chicken wings were deep fried and marinated well to perfection. It was crisp, crunchy with a good hint of spicy and salty textures. What’s my verdict? It was  delicious. It was finger lickin’ good. 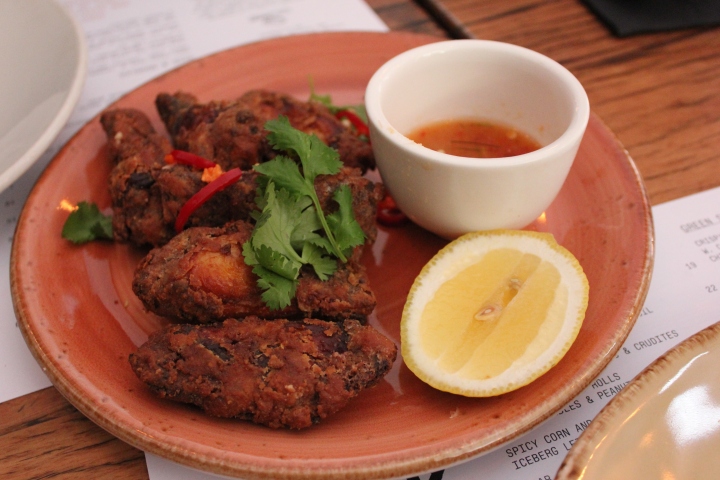 To complement our bowl of rice, we had the stir fried green beans and ginger with a coconut burnt chilli and cashew sambal ($14). The green beans were stir fried to perfection and I must say that the dish is a little bit spicy as it gives a subtle chilli kick from the cashew sambal with an occasional crunch. However, the dish could be a bit better if it was a bit moist.

The chinook salmon arrived wrapped in banana leaf with coconut red curry, lime and thai basil ($26). The salmon was fresh and tender. It was aromatic and bursting in flavours as it was marinated well with the coconut red curry. The lime and thai basil also contributes its fresh flavours and acidity to the salmon. It was absolutely delicious that all of us agreed that this dish was indeed the winner of the night.

To finish, we had the coconut sago with sweetcorn ice cream, praline and puffed wild rice ($14) for dessert to share. The coconut sago was rich, smooth and creamy with the occasional crunch from the praline and puffed wild rice. The sweetcorn ice cream was lovely with subtle bits and pieces of corn. It was a lovely dessert to finish off the night.

Everything on the menu  at Chin Chin looks so good that it is a tough choice deciding what to order. If you really can’t decide, just say “Feed Me” and you will be served with a selection of Chin Chin’s favourite dishes for $69 per person. With such high quality and authentic Asian food, it is no doubt that Chin Chin is so popular among locals in Melbourne. Chin Chin, I will definitely be back!

There was an error retrieving images from Instagram. An attempt will be remade in a few minutes.